Matteo Nunziati is considered one of the most influential international architects and designers of his generation.

Specialized in luxury hotels, wellness centers, SPA and residential projects, Matteo Nunziati has realized projects over the years in Italy, United Arab Emirates, Qatar, Saudi Arabia, Kuwait, India, Maldives, China, USA.
Particularly significant the collaboration with the Trump Organization, world leader in the real estate, which chose Matteo Nunziati for the Trump Towers project in Pune inaugurated in 2017 and considered one of the most prestigious properties in Indi, winner of the NDTV Property Awards. Very seignificant also the renovation of the Trump National Doral in Miami Florida, the Trump Towers projects in New Delhi and Kolkata. An other important realization is the largest 5-star hotel in Doha, Qatar the “Fraser Suites West Bay” a 50-story tower awarded with the World Travel Award. Other projects that sign Nunziati’s story are the Radisson Blu Residence in Dubai Marina, the Radisson Blu Hotel Apartments Dubai Silicon Oasis, the Aston Martin Residences in Miami, the renovation of the suites of the prestigious Four Seasons Hotel in London at Park Lane and the Park Hyatt Hamburg.
His most outstanding residential projects are the Bosco Verticale penthouse in Milan winner of the prestigious Royal Institute of British Architects Award (RIBA) 2018 for International Excellence, the skyscraper penthouse in New York at 432 Park Avenue that is considered one of the most prestigious residential buildings in the world and the most expensive one thanks to the sale of one apartment for 95 million USD. Private villas in Kuwait City, Dubai, Singapore, San Marino, Muscat, Pune, Bangalore extend Nunziati’s portfolio.

His projects, exclusive and enhanced by the skillful selection of materials and furnishings, usually chosen from the production excellence of Made in Italy design, have been published in the major Italian and international magazines.

His solid experience led Nunziati carry out teaching activities at important institutions such as Domus Academy, the National Taipei University of Technology, the IDI Interior Design Institute of Milan and the Tshinghua University Shenzhen in China.
He has also participated as a speaker at numerous international conferences and was selected in 2006 among the most significant designers of international design from 1954 to 2006 on the occasion of the 50 + 2y Italian design exhibition at the National Art Museum of China. He was selected among the best 100 International Architect / Interior and product designers in the publication “Icon Architects 2018”.

Milano is the world’s capital of fashion and design, strategically well connected with the world’s top metropolis, 1 hour to London, 6 hours to Dubai, 8 hours to New York, 13 hours to Hong Kong. In April of every year the international most important design fair (Salone Internazionale del Mobile – Milano) takes place in Milano. The headquarter of Matteo Nunziati is located north-west of the city where all the great projects are springing up which are requalifying the city that goes from the center (Varesine – Porta Nuova) and arrives to the New Exhibition Center of Rho, the biggest in Europe and the Expo 2015 area, a few minutes from the historical city center and at the same time strategically close to the top international design factories. The office got renovated and transformed from an old factory where originally metal was worked into a showroom of creativity and design excellence. 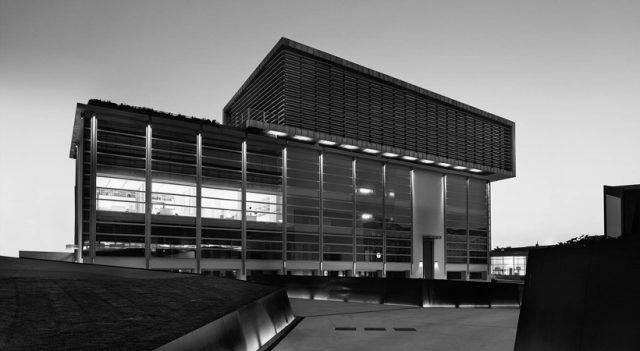